Are You Listening To Me?

I can remember when everyone in my family wanted my mom to get hearing aids.  It was so frustrating to have her look at you and nod and you knew she did not have a clue of what you had just said.  Also, her asking me “what did they say” wore thin quickly in group situations.  Shouting did not help cause she could not hear that either.  Eventually she got hearing aids – which helped – but then she would take them out cause they bothered her ears.

Funny story (after the fact):  I was out of town and I tried several times during the day to call my mom.  She lived on her own in a condo and was a very independent lady.  After several tries throughout the afternoon of calling her and not getting an answer, I called my dear friend Bill Cummings and asked if he would check on her.  I knew she was home and yet she was not answering her phone.

He tried banging on her door – BANGING ON HER DOOR – and there was no answer.  He tried the phone again.  No answer.  We decided to get the police involved and so he called them.  As he was waiting for the police, he went around to the back deck to see if he could see anything.

There was my mom, sitting at her counter, with her back to the deck door, playing solitaire.  He banged on the door.  BANGED ON THE DOOR.  She finally turned around cause she felt the banging, but did not hear it.

The police arrived.  She opened the door.  Bill called me.  Everything was fine.  She had removed her hearing aids and set them on the counter.  She was mad as hell at me to creating this commotion.

Moral of the story:  listening and hearing is pretty important.

How are your listening and hearing skills?

A couple of times a year I invite my list to take the listening test.  Many who have taken it before, take it again to see how they are doing.  For those of you that have not taken the listening test, you might want to take a couple of minutes and see how you are really listening.

True Story:  I had an Director of Recruiting for a major hospital group in the US call me and ask if I could do a team training for his 7 locations in the US.  He told me the problem was that his team was not very good at listening and he wanted to add to their skill sets; make some improvements and see how it would affect the results and outcomes of the team. 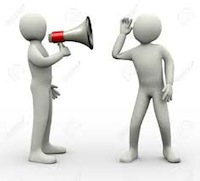 I asked him to take the listening test first.  He was a bit skeptical, but took the test.  He did poorly on the test.  After taking the listening test, he said it was the best few minutes he had spent as a manager and it saved him some embarrassment in working with his team.  He thought they was the issue when in fact he probably was contributing a large part to the listening and then implementation for the success of his team.

I am sure you are probably not nearly as deaf as my mom, but you might occur to the people around you as listening (or not) like you cannot or will not hear them.  Take the test.  What have you got to lose?

P.S.  Do share the listening test with your team, colleagues, boss, BOD – whomever you think might benefit from the test and then the results. https://nataliemanor.com/are-you-good-listener/